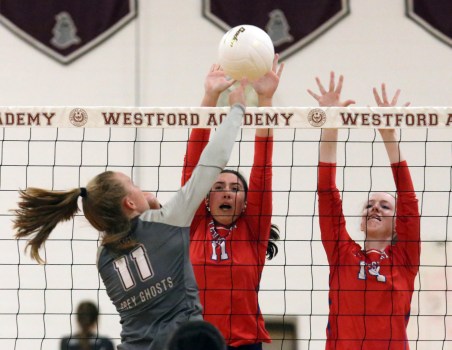 Westford Academyâ€™s Megan Tierney (11) makes a play at the net against Tewksburyâ€™s Maddison Cueva (11) and Kylie Tibbets during a volleyball match last fall. (SUN/Julia Malakie) By | May 18, 2020 at 9:13 p.m.Starting next year, the MIAA will go from three girls volleyball divisions in state tournament play to five, after 153 teams qualified for postseason play last fall. One of the reasons for the increased numbers is allowing boys to play on the girls teams with an estimate of about 100 playing across the state last fall.

Volleyball Welcomes Five to Class of 2024

By Scott Akanewich When the Lady Panthersâ€™ lineup is announced before a volleyball match ...